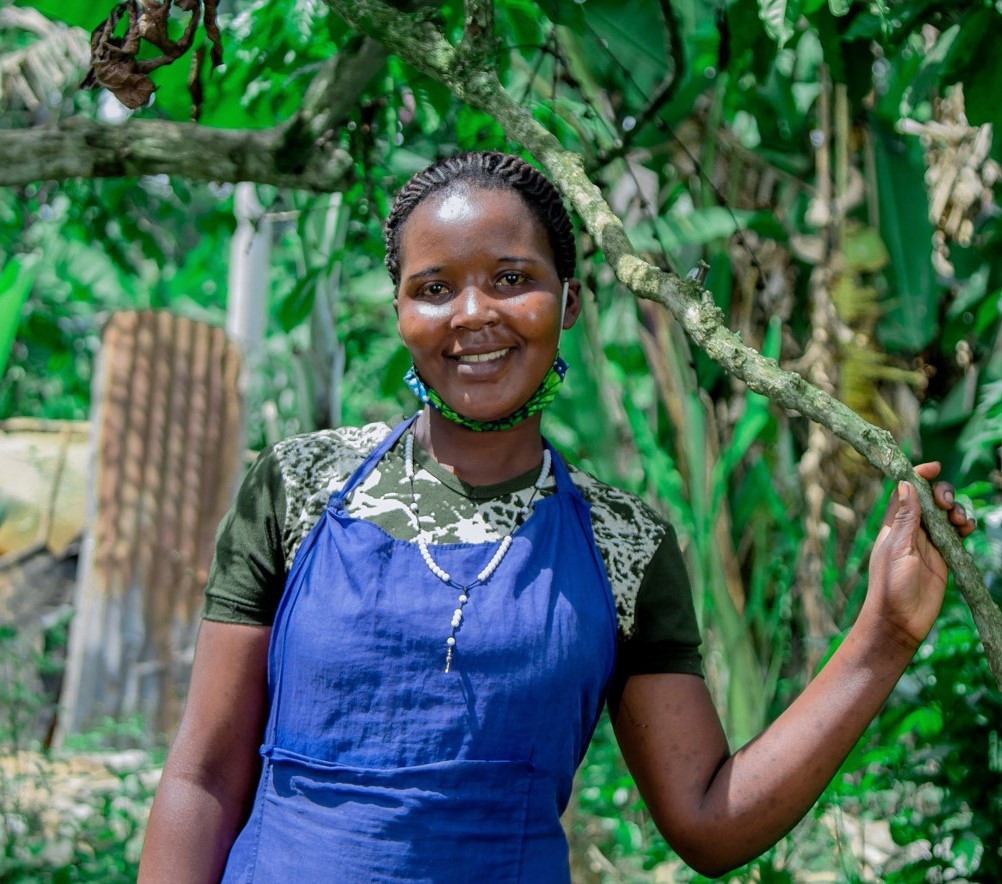 Justine is a 24-year-old single mother living in the Mpigi district of the Central region of Uganda. Joining the 100WEEKS program in December 2019, her expectations and ambitions for the new year were bigger than ever. As for many of us, the coronavirus introduced some unexpected challenges, but the example of Justine shows how the perseverance and dedication of the women, combined with the flexibility of the 100WEEKS program, create impressive resilience.

Justine Nakazzi lives together with her grandmother, her 5-year-old son and her 3-year-old daughter. They share a small house near the Nsamu trading center in Central Uganda. In December 2019, she received her first payment as part of the 100WEEKS program. The knowledge that this would become a weekly source of income did not make Justine complacent or passive. In fact, as goes for almost all women enrolled in the 100WEEKS program, Justine immediately started making plans and worked hard to realize them. Her first goal was to buy a plot of land, so that she could build a house for her family.

With this ambition in mind, Justine worked long hours. Her day would start early in the morning, when she went to a neighboring farm to do some casual labor. After lunchtime, Justine passed by the food market to use the money she had just earned to buy enough food for her second job: a roadside food-selling business. She prepared a meal for her two kids, her grandmother and packed the rest of the food to sell at the Nsamu trading center. Justine took a “boda-boda” (Ugandan taxi bike) to the road close to the trading center and found herself a good spot to sell her freshly prepared meals until late in the evening.

Things were looking great for Justine. Because she used the same food she sold to feed her children, she hardly touched the 100WEEKS money. Every week, she saved most of the money she received from 100WEEKS. She even saved a part of her income from the roadside business, as the profits were high and her expenses were low.

The importance of saving when living in poverty is well established, because returns on investments are often relatively high. However, research shows that when the final goal of saving seems unreachable, people are more prone to spend their earnings on short-term temptations, creating a so-called poverty-trap.[1] Justine only consumed one meal a day before she entered the program, so saving did not seem reasonable. After joining 100WEEKS, she started eating two meals a day and felt revived by the security of a structural and unconditional income. She dedicated herself to saving as much as she could.

The 30th of March, after 14 corona cases had been officially confirmed, the Government of Uganda announced a set of drastic lockdown measures to further curb the expansion of the virus. Gatherings were banned, shops for non-essential goods were forced to close, public and private transport were shut down and a curfew was imposed from 7 PM to 6:30 AM.

For Justine, as for many of the country’s informal workers, these measures meant that both of her jobs practically disappeared. She was not allowed to go outside and sell her food in the evenings because of the curfew and during the day she could not reach the trading center because of travel restrictions. As the boda-boda motor taxis stopped operating, many rural people were practically closed off from society. Casual labor on farms was only allowed if the farm was at walking distance from your house. Because many workers from Kampala returned to their villages as they lost their city-jobs, competition in the casual-labor market increased.

During the first two weeks of the lockdown, Justine stayed home as much as possible, using the 100WEEKS money to buy basic necessities. The money made it possible to comply with all government regulations and she used her 100WEEKS phone to listen to the radio news. Our Ugandan program manager Catherine Tabingwa kept in close contact with all women to monitor their wellbeing. Justine felt like she was being held back, because her business was doing great before the lockdown. However, she understood that she was also lucky, being able to use the cash-transfers for daily expenses, leaving her savings untouched..

Perseverance pays off
Justine was determined to restart her roadside business as soon as the government restrictions would be eased. She decided to use this extra time to invest in the post-lockdown period. Having learned about farming through her casual labor at neighboring farms, Justine decided to cultivate her own matoke (a typically Ugandan “cooking” banana) as well as sweet potatoes, both products she uses in the meals for her roadside business. The crops, which she planted on some unused family land close to her home, will need a couple of months before they can be harvested. After, she will be able to use her own products for her business, saving money and increasing profit. This type of labor-intensive investment, which will only contribute to the bottom line after months of work, was only possible because of the buffer she had created in the months before.

All this hard work has paid off. At the end of May, Justine was able to make a three-quarter down payment for her own plot of land, realizing her first ambition of her 100WEEKS trajectory. She will use the land to build a comfortable house for herself and her two children. If it was not for the setback caused by the coronavirus, she would have been able to pay the full price at once, an exceptional achievement after such a short period of time.

The curfew in Uganda was lifted the 23rd of June. Justine resumed her profitable roadside business to quickly pay off the balance on her newly purchased plot of land. In the meantime, she will work on her own farm, patiently waiting until this investment will significantly increase her profits in a couple of months.

Justine’s story shows the exceptional flexibility and resilience cash-transfer programs provide. The cash has enabled Justine to dream, to plan for the future, to save, to invest and to survive during a global pandemic. Surely, the coronavirus-induced crisis hit her hard, she lost both her jobs, but the lifeline of cash prevented Justine from falling into despair. It strengthened her discipline by providing a realistic path forward. Indeed, getting “free money” did not make Justine passive, instead it inspired dedication and ambition.

The road ahead will be bumpy, as it is still unclear how big the implications of the crisis will be for local economies in countries like Uganda. Nevertheless, Justine has proven that she is well prepared and well equipped to take on the challenges that lie ahead.